Carl Karl, a portfolio manager for the Alpine Trust Company, has been responsible since 2015 for the City of Alpineâ€™s Employee Retirement Plan, a municipal pension fund. Alpine is a growing community, and city services and employee payrolls have expanded in each of the past 10 years. Contributions to the plan in fiscal 2020 exceeded benefit payments by a three-to-one ratio.

Â  The planâ€™s Board of Trustees directed Karl five years ago to invest for total return over the long term. However, as trustees of this highly visible public fund, they cautioned him that volatile or erratic results coul d cause them embarrassment. They also noted a state statute that mandated that not more than 25% of the planâ€™s assets (at cost) be invested in common stocks.

Â At the annual meeting of the trustees in November 2020, Karl presented the following portfolio and performance report to the Board. 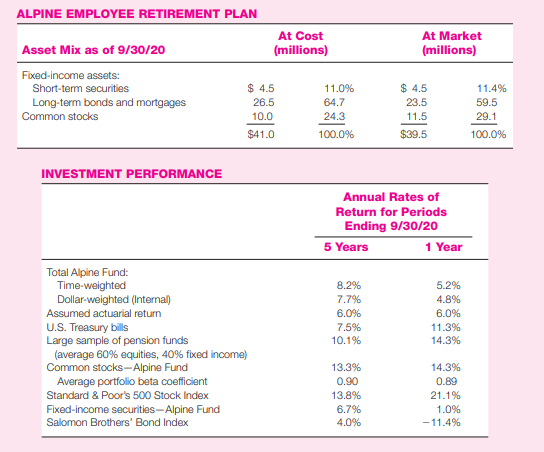 Karl was proud of his performance and was chagrined when a trustee made the following critical observations:

Â a. â€œOur one-year results were terrible, and itâ€™s what youâ€™ve done for us lately that counts most.â€

Â b. â€œOur total fund performance was clearly inferior compared to the large sample of other pension funds for the last fi ve years. What else could this refl ect except poor management judgme nt?â€

Â d. â€œWhy bother to compare your returns to the return from Treasury bills and the actuarial assumption rate? What your competition could have earned for us or how we would have fared if invested in a passive index (which doesnâ€™t charge a fee) are the only relevant measures of performance.â€

Â e. â€œWho cares about time-weighted return? If it canâ€™t pay pensions, what good is it!â€ Appraise the merits of each of these statements and give counterarguments that Mr. Karl can us e.