Review the following description of an economic impact study and answer the questions that follow. When you have finished, you will have measured the economic impact of a large sport event. You have been commissioned to analyze the economic impact on the city of Cincinnati of the MLB All-Star Game. Specifically, the community wants to know the direct spending impact, the indirect spending impact, and the fiscal/tax impact. Cincinnati officials want to know whether it would be profitable to fund and bid for similar future events for the city. This event cost the City about $8 million to host. You created a survey and administered it to 342 people around Great American Ball Park during the game, making an effort to obtain a random sample. Only 325 of the surveys were usable because of various errors by the respondents. You entered the data into a spreadsheet and are now ready to analyze the economic impact. To allow you to do this analysis, your instructor will provide you with an Excel file containing two spreadsheets: Survey 1 and Key. Survey 1 is the spreadsheet in which the data have been entered, and the Key spreadsheet describes and explains each column of data. Be sure to measure economic impact for all visitors, not just those who responded to the survey. (A survey is a sample of the target population.) Based on discussions with the local organizing committee and Cincinnati government officials, you determine that: 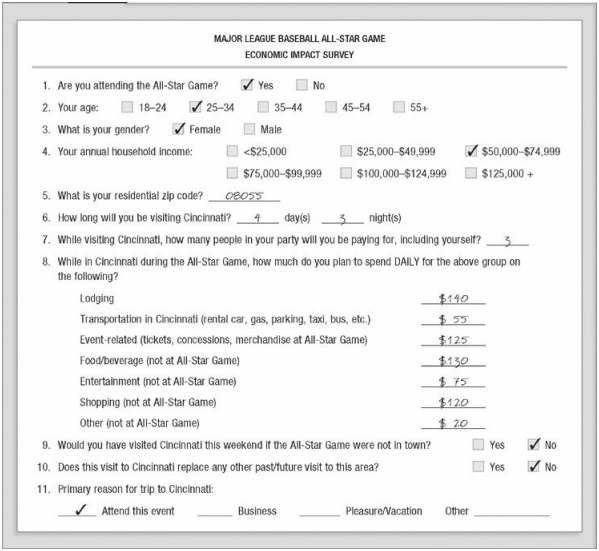 Â·Â Â Â Â Â Â  The city sales tax is 6.5% and is collected on all goods and services except hotels.

Â·Â Â Â Â Â Â  The average number of persons per room for large events such as this is 2.4.

Â·Â Â Â Â Â Â  Total spending by the local organizing committee was $4.5 million, with 60% of that amount coming from organizations outside of the city. This is in addition to the amount the City itself spent. Sponsors spent $1 million in town activating their sponsorships.

Â·Â Â Â Â Â Â  The spending multiplier for the city of Cincinnati is 1.6 (based on information from MIG, Inc.).

Note: A few data entry or survey respondent errors have been included in the spreadsheet.

1. How many people attended the All-Star Game in total?

2. How many visitors (people who are not local residents) attended the All-Star Game?

3. How many visitors who attended the game were time-switchers?

4. How many visitors who attended the game were casual visitors?

5. How many visitors should be used in the calculation of the economic impact estimates?

6. What is the per-person spending per day by the â€œincrementalâ€ visitors for everything but lodging? (Use your result from Question 5.) What is that number for lodging per night stayed?

7. What is the average length of stay for incremental visitors in terms of days and nights?

8. What is the per-person spending per stay by the incremental visitors?

10. What is the total economic impact?

11. Based on hotel capacity information, how many typical visitors did the event visitors crowd out?

12. What is the new direct and total economic impact, accounting for the crowding out?

13. What is the fiscal or tax impact of the event on the city?